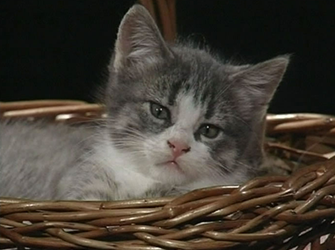 A film intended for people with moderate to severe intellectual disability.

An Egg…A Chick!
This footage clearly shows every stage of development: a white egg was shot against a blue background and nothing else. The soundtrack is a simple heartbeat.

Young Kittens
Against a black backdrop, the camera follows the movements of two litters of kittens that are visually very different. The only sound is a cat purring.

An Egg…A Duckling!
A repeat of the process of an egg hatching. The entire process was shot at a very easy pace, from the intact egg all the way to the yellow duckling whose feathers are now nicely dry.

Young Puppies
Cocker spaniels and golden retrievers are of course de rigeur in a film of baby animals.

Baby Animals is quite different from other films about animals due to:

There are no reviews yet.

Be the first to review “Baby animals” Cancel reply

You must be <a href="https://www.klosmedia.nl/en/my-account/">logged in</a> to post a review.